April 30, 2019 is my grandfather’s 123rd birthday. Joe Markway was friendly and sociable, making him well-known around Jefferson City, Missouri. Grandpa died when I was just 11, and the main thing I remember about him is his sense of humor. I can still hear his laugh and see his smile. I had no idea how much sadness he must have endured.

He was born in 1896. His birth certificate lists his mother as Adelaide Auer, or Aner, depending on how you read the cursive handwriting of the time. He was born at Misericordia Hospital in Manhattan, a hospital that primarily served poor, unwed mothers. The next day, he was left at the New York Foundling Home, a Catholic orphanage run by the Sisters of Charity.

Grandpa came to central Missouri in 1901 on an Orphan Train, and he was taken in by Fred and Catherine Schnieders Markway. I have seen only one photograph of him with the Markway family and it is clear that he is not their natural-born son, as he is several inches shorter than everyone else.

His early life could not have been easy—being left at an orphanage, first going to Nebraska on an orphan train but having to return to the Foundling Home when the father in his first adoptive family became ill, and then going on a second orphan train to Missouri and becoming part of yet another family.

He endured more trauma as a young man fighting in World War I. My older brother, Jack, asked Grandpa about that once, and it was clear that my grandfather was haunted by his experience in the war, and he didn’t want to talk about it.

At some point—no one currently living knows exactly when—Grandpa returned to New York to look for his birthmother. Upon returning to Missouri, he supposedly said that he was “a Markway now.” No one knows what he found in New York. Jack recalls our grandfather as sometimes starting to talk about being left at the Foundling Home, and then stopping, as though talking about it made the emotions all too real. But once, Grandpa spoke of his mother being named “Abbie Doyle.” I have no idea how he would have found that name.

Joe Markway married Bernadine Katherine Bruegging in 1921, and a year later, my father was born. Two years later, the couple had their second child, Mary Dolores, but she would die at the age of two. They went on to have two more daughters.

As I put together this summary of my grandfather’s life, I am struck by the sheer quantity of sadness. At the same time, all this sadness is somewhat surprising because that is not what I saw from him. I don’t know how he handled it all.

As a relatively young man, in his early 30s, he opened his own business, an automobile dealership. He sold Hupmobiles, and up and coming brand at the time. I remember hearing stories about how to sell someone a car, you also had to teach them to drive. He eventually also sold other brands—Plymouth and DeSoto. His business was growing and he was well-liked. He knew how to sell and he loved the mechanical aspects. He repaired the cars he sold—he did everything.

But then, the Great Depression hit. The Jefferson City newspapers report that he was touring Hupmobile factories in September 1929 to learn about the new models coming out. One month later, the stock market crashed, and I assume new cars became few and far between. Newspaper ads for Cole County Motor Company show new cars for sale in 1930, and then used cars for sale, and by 1932 the classified ads primarily focus on automobile repairs with only an occasional car for sale. There are no signs of his business after 1932. 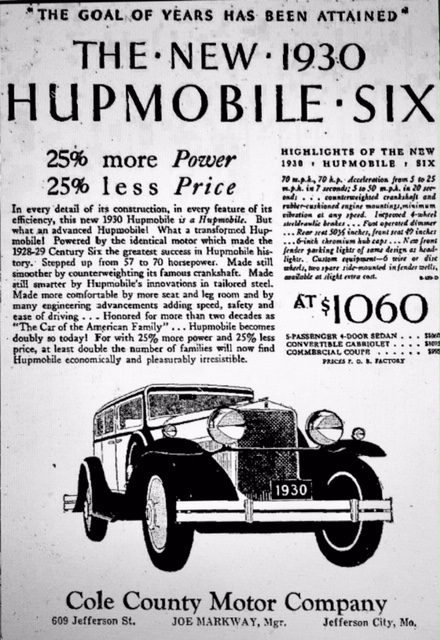 After that, Grandpa appears to have had a few different jobs, but his primary career after that was as an auto mechanic, working for local tire and auto repair companies.

I have many memories of my grandfather, but they are more like photographs or short film clips. I can’t connect them all to the broader story. He died in 1970 when I was 11.

When my family moved back to Jefferson City from St. Louis, I was just three. Our family of seven moved into a two-bedroom house, and Grandpa and my brother, Jack, finishing the attic of the house into one big bedroom I shared with my two older brothers. For a while, Grandpa shared that bedroom as well. That attic, with no air conditioning, was rather unpleasant in the summer.

I don’t remember how long Grandpa lived with us, or why he left. I seem to remember him going to live with my aunt and uncle, the Fergusons, and their kids. (If you live in Jefferson City, you may very well know one or more of them—Rob, Gary, Shelley, and Lynn.)

I was always curious about Grandpa’s past but never really expected to learn more.Over the years, I had contacted the New York Foundling Home (now the Foundling Hospital), seeking information. Once they responded that they had no information, and another time they said the only records they had showed him as being adopted by the Markway family and that he was happy there.

A little over two years ago, I took an Ancestry DNA test. I hoped to find Grandpa’s mother—I don’t know why I didn’t think about finding his father. I really had no idea what I was doing. I had searched online for Aners (and Auers) online previously but hadn’t found anything too promising. When I got my test results, my DNA matches, several weeks later, I had no idea what I was looking at. I was overwhelmed by the sheer number of people who shared DNA with me. As of today, I have approximately 34,000 people who have taken an Ancestry DNA test and are related to me.

My mother, Ruby Yarnell Markway, was related to everyone in the United States it seemed. Many of her ancestors came to colonial America in the 1600’s, and they were prolific to say the least. So, it was quite a task looking for people who were not part of her family. Eventually, though, I identified a small number of people who turned out to be connected to Grandpa’s father. I have communicated a great deal with them and hope to meet one of them this fall.

To that point I still had not identified anyone connected to Grandpa’s mother. I had searched everywhere for an Abbie Doyle, but searching for a common Irish name in New York at the turn of the century is not a very productive use of time.

I scoured census records for women named Adelaide Auer and Adelaide Aner, but couldn’t find anyone by those names who would have been the right age.Then, one day, I found one of my DNA relatives had an “Ada Auer” in her family tree. I was so excited—this could be the one! But, further research revealed that she only became Ada Auer years after my grandfather’s birth when she got married.

I felt like giving up. What were the odds I was going to find Grandpa’s mother when I didn’t even really have a name. Adelaide Auer likely was a fake name.

I have asked myself why I’m so obsessed with this, why I feel a need to know where Grandpa came from. My answers are hard to explain. I somehow feel I owe it to him, I know that with each passing generation, the task grows more difficult. He clearly felt that need to know his roots and going back to New York. I don’t know where he would have even started, other than maybe returning to the Foundling Home and asking questions.

So, I tried to start with a clean slate. I was able to identify a group of people connected to my paternal side—they shared DNA with me, my brother, and my cousin, Gary Ferguson—but did not show any connection to my paternal grandmother (the Brueggings and their ancestors) nor to the Van Stens (my grandfather’s father). As I searched, I realized I was tracing a vein of gold in the gold mine.

But things were far from simple. Where do I go from here? How do I figure out how these people connect? I started looking through the family trees of those people who had shared them online. There was good news and bad news—I was finding some recurring names…but they were Irish. Every family had children named Michael, Patrick, John, and my favorites, Mary Margaret and Margaret Mary. Every generation was like this!

As my frustration grew, I was looking at a family tree, and there it was—Abigail Camille Doyle, born 1873 in Northampton, Massachusetts.

One thought on “The Mystery of Joseph Auer–Mom?”