For the past two years, I’ve been searching for clues regarding my paternal grandfather’s origins, and I can now say, with a reasonable degree of certainty, that I have found his father.

My grandfather, Joseph Auer came to central Missouri on an Orphan Train from the New York Foundling Home and was adopted by the Fred Markway and Catherine Schnieders Markway family. Joseph longed to find his birth family, but that was not possible in that era. The Foundling Home asked no questions when a child was left in its care, and the culture of the time required secrecy.

For a while, I have known that my grandfather’s origins could be traced back to the Van Sten family of New York City two brothers possibly being my great-grandfather.

Fortunately for me in my search, multiple descendants of the Van Sten family took DNA tests with Ancestry, and this allowed me to compare my DNA (as well as my brother Jack’s) with that of my fellow Van Sten descendants. Through multiple DNA tests, I have verified that I am descended from a male member of the Van Sten family–so Catherine could be eliminated as a potential great-grandparent. There were three males of that generation, one of whom died in childhood, leaving James and George as possibilities.

DNA testing results showed that Jack and I shared slightly more DNA with descendants of Catherine than with descendants of James (the differences are small statistically, but strongly suggest that James is not our direct ancestor). That left George. He never married, and has no other direct descendants that I’ve been able to identify.

So, what do I know about George and the rest of the Van Sten family?

The first definitive documentation I can find on this family is a James Vansten, born in Ireland in 1809, marrying Sarah Murphy, also born in Ireland (in 1810). They were married at St. Nicholas Catholic church in Liverpool. James’ occupation is listed as a “cordwainer,” or shoemaker.

James and Sarah had a son, Richard born in Liverpool, England in 1834. The family left England for the United States when Richard was two-years-old. James and Sarah had a total of five children. Sometime before 1855, it appears, Sarah may have died (she is not listed in the New York Census record for that year).

Richard Van Sten had a brother that was not listed in the census record above. That brother was named George, but this George died near the end of the Civil War after serving in the Union Army. I do not know if he died as a result of the war, or from other causes.

Richard’s wife, Mary Ann Ryan, was born in New York. She was seven years younger than Richard, and they married when she was about 18. They had four children. Catherine came first in 1860. Then there was James in 1861, followed by Richard Jr. in 1864–but the family endured a tough time when Richard Jr. died four years later. Then, in 1868, George arrived, apparently named after his late uncle.  George lost his mother when he was just five. George’s father found a housekeeper, Annie McCaffrey, to help with the children. George’s father died in 1888 when George was 20.

In 1915, George was involved in a lurid lawsuit after his fiance married another man. (I wrote about that in more detail here.)

George died in Philadelphia, of chronic bronchitis) in 1934. He is buried in Calvary Cemetery in Brooklyn. 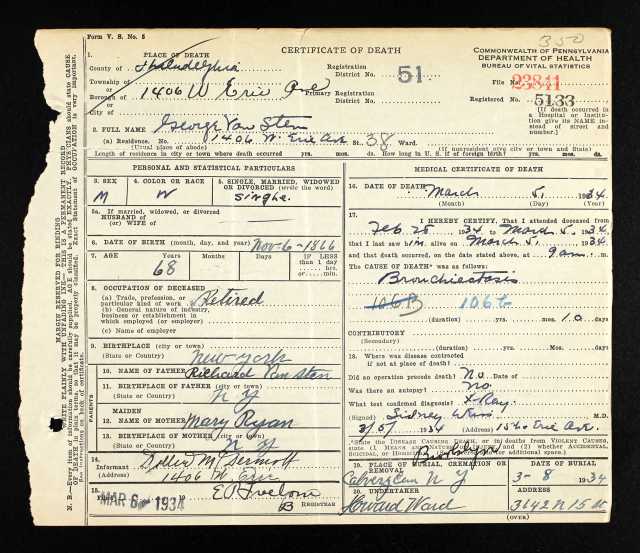 In talking with people who are very distantly related to me, many generations back, I have found various potential branches of the family. The Vanstones came from Devon, England. That is likely the origin of the Van Stens, with the spelling changing for unknown reasons–perhaps it was just a transcription error.

So where does this leave me in my journey? Well, I still have no clear leads on my great-grandmother. There my be clues in my DNA connections, but I have not yet identified them. But…I’m still looking.

Soon, I will write about my maternal side. I have found some wild and fascinating stories about Mennonites getting taken hostage by their church in Switzerland and forced to leave the country, about families being invited by William Penn to come to Pennsylvania, and about descendants of these families coming to Missouri when they are given land. They end up in Cole, Miller, and Moniteau counties.

Thank you for reading.