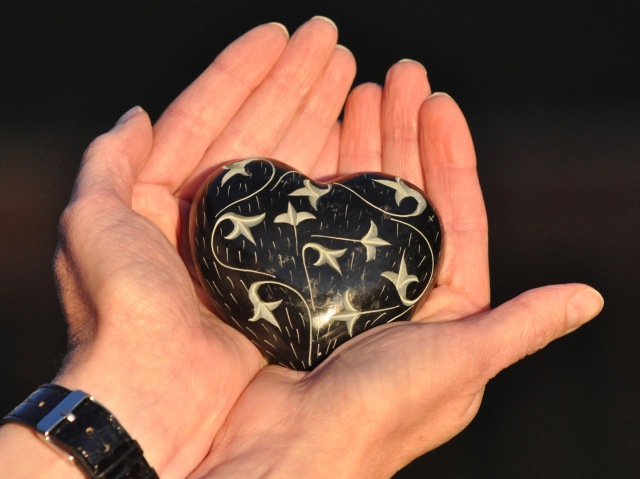 I had a heart attack nine days ago. The next day, a cardiac catheterization found one coronary artery 80% blocked (a stent was used to prop this one open), another 70% blocked, and one on the right side was 100% blocked.

I had been feeling fine and had been training to run a 5k on Thanksgiving day–tomorrow.

I had been a little more tired in the afternoon, but hadn’t really given it a second thought. I’ve always been on the skinny side. (The first game I pitched in college, a vociferous southern gentleman suggested I was so skinny I could “tread water in a garden hose.”) I had a decent diet (conscious of watching the amount of fat I consumed). I never smoked. I had annual checkups that found my cholesterol and triglycerides to be in the acceptable range.

Last Monday, I was walking down the hall at work. I stopped briefly to talk to a coworker. At the end of that conversation, my left arm tingled like it was falling asleep. I felt pressure in my chest. I had a moment of tunnel vision.

I knew something was wrong with my heart.

I walked back to my office and it all went away. My denial kicked in and I momentarily thought everything would be ok. But, thankfully, I knew better. I needed to go to the hospital. I told my assistant I was leaving to go to the doctor, but I didn’t tell her why–I didn’t want her to worry.

I still had enough denial, though, to drive myself to the ER (what in the world was I thinking?).

Within moments of arriving at the reception desk of the ER, I was in a room with three sets of hands on me (starting an IV, giving me an EKG, and drawing blood).

I had not yet called my wife, Barb. I didn’t have my cell phone with me. You see, I had given it to her in the ER the night before when I had gone in due to a weird sensation in my arm. That night, my EKG was normal. The strange feeling in my arm followed a specific nerve pathway. It appeared that I may have had a pinched nerve. (Even in retrospect, that was a reasonable hypothesis.)

This time, my symptoms were much stronger, much more clear. I asked the nurse to call my wife, and Barb was there within minutes.

At various points, I thought about my brother Steve who had died suddenly from an apparent heart attack 18 months earlier.

As brothers, Steve and I had some things in common. But we also had significant differences. We were twelve years apart in age and sometimes it felt like we were from different generations. When I was younger, I sometimes felt that he was a parent more than a sibling.

We also had significant personality differences. He felt queasy even walking into a hospital. I became a psychologist, spending some of my time consulting on medical units, primarily with cardiac patients.

Here I was, sharing one very important thing with him. I was having a heart attack. But mine was different–I had some warning.

I can’t explain it. Who knows if what I’m describing is literally true. All I can do is say how it felt.

It wasn’t my time to leave.

When I was wheeled up to the cardiac floor, I saw several nurses I knew from the time I worked there. It was comforting that they still worked there, that they are so committed to their work, and that they remembered me.

Physically, I felt fine. Emotionally, I was in an altered state. I knew my life had forever changed, even though I didn’t really know what that meant.

Barb was with me the whole time, loving and supportive, knowing just what I needed without me having to say a thing. Other family members came to see me. By this time, Barb had brought me my phone and I had emailed and texted friends and coworkers.

Late that afternoon, I encouraged Barb to take a break.

As I rested quietly in my room, I looked out the window and could see the tops of some very mature trees. I watched them sway gently in the wind and thought about how good my life has been.

I have a beautiful wife that has loved me for 27 years. We share a grown son who brings kindness and compassion to the world. I have done important work. I have always had everything, and more, that I needed.

Death was close, but for some reason, now was not my time.

The next morning, I went through the cardiac catheterization. I came out feeling fine. The next evening, I was home with instructions to relax for the next couple weeks until my follow up appointment with the cardiologist. At that time, I may need another stent, although that’s not certain.

I’m not saying this has been easy. I have experienced a whole range of emotions and shed some tears. But, for some reason, I am still here and I don’t exactly know why. Maybe I’ll never know. I have been rethinking my priorities without really knowing where this process is taking me.

Throughout my life, I have used writing  as a way of processing my feelings. I had been unable to write anything of my experience until today, when I read a story on NPR’s website titled Instead of ‘What,’ Be Grateful for ‘When’ This Thanksgiving.

I encourage you to read the whole column by Adam Frank, an astrophysicist at the University of Rochester. He describes how we should not just be thankful for things, but for time. Time is the real gift we have been given.

This year, more than ever before, I am thankful for the time I have been given.

Please consider Frank’s thoughts as part of your Thanksgiving prayer:

“…this Thanksgiving, I’m shooting for being thankful of when. I’m hoping this long moment which is my life will find its knife’s edge at that table, filled as it will be with bounty and surrounded as it will be with love. I’ll try to be aware–keenly aware–that this moment always comes unbidden and, in that way, I am always being given a great gift. For that, I’ll be truly grateful.”

6 thoughts on “Giving Thanks for the Gift of Time”